Single Payer IQ Test – Question 1: Who is the single payer?

Answer: The federal government is the “single payer,” collecting money from taxpayers and creditors and distributing it through its agencies and contractors.

Most American advocates of the single payer will say they are against “socialized medicine,” in which the government owns the means of production, and medical workers are its employees. This is the monopoly model, as in the British National Health Service and the U.S. Veterans Administration.

“Single payer”advocates usually favor the monopsony model, in which the government is the single buyer rather than the single seller. Canadian medicare for all and U.S. Medicare for the elderly and the disabled are organized in this way. Hospitals and doctors’ offices are privately owned. Doctors and other medical workers are government contractors rather than employees. In the U.S., they are in effect subcontractors of the corporate giants called “Medicare carriers,” or of the managed-care plans in the Part C (Medicare Advantage) program.

With single payer, all “healthcare” dollars first pass through a giant collective pool managed by government, which effectively is the single customer that must be satisfied.

Medicare dollars come from workers’ earnings and the premiums for Parts B and D. It is a “paygo” system, not an insurance system: what comes in goes out, and no insurance reserves are accumulated. Until recent years, there was more money coming in than needed for current medical bills, and it was spent on other government obligations although people think it went to the Medicare Trust Fund. The Trust Fund is actually a collection of IOUs, now being redeemed. It’s a way of concealing part of the government’s deficit spending.

Giant corporations bid for contracts to be one of Medicare’s regional carriers. It is more lucrative to administer hundreds of billions of dollars in government funds than to sell to individuals and bear risk like casualty insurers do. Under the Affordable Care Act, for example, insurers are withdrawing from the individual market, but racking up big profits from their managed-care plans in the Medicaid expansion. [1] UnitedHealth Group may ultimately be the single payer. [2]

Government already pays for around two-thirds of U.S. medical care. [3] Government health programs are the main contributor to the enormous expansion of government. [4] As is acknowledged every time the debt limit is reached, tax revenue is insufficient to pay all the government’s bills; 43 cents of every dollar spent is borrowed. [5] 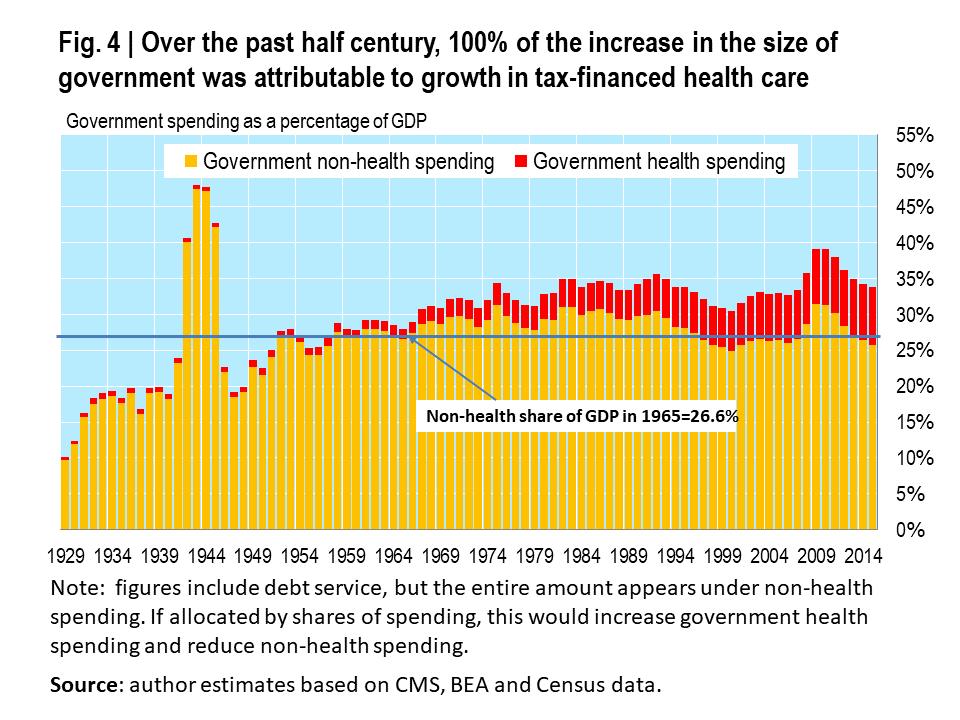