Book Review: Demonic: How the Liberal Mob Is Endangering America by Ann Coulter 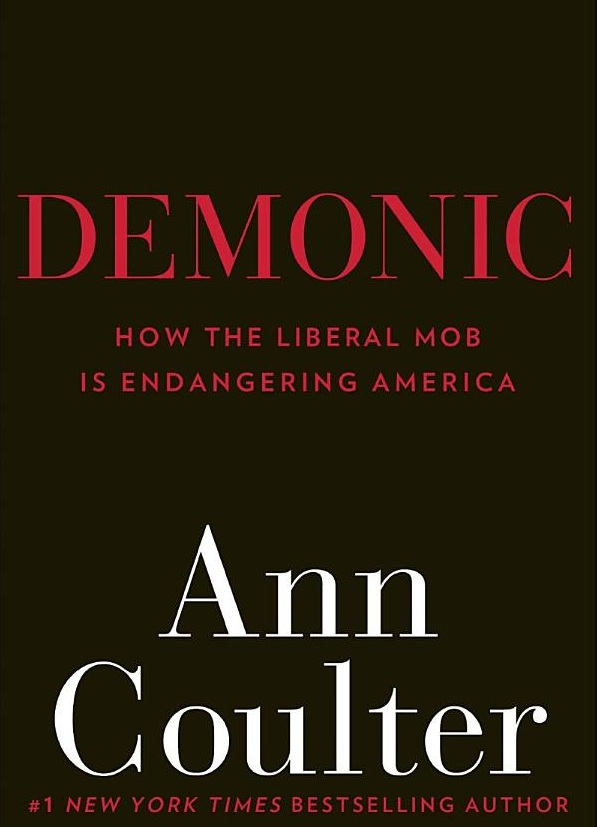 A delightful way for today’s citizen to learn the reasons for recurring widespread poverty, suffering, and death caused by irrational liberal policies over the past century is to read Ann Coulter’s insightful take on liberal history in her entertaining latest bestseller, Demonic.

As she points out, the classic 1896 book, The Crowd: A Study of the Popular Mind by the French social psychologist Gustave Le Bon, brilliantly describes the characteristics of mob behavior, including large-scale popular delusions. She says the book is relevant today since it describes the traits of modern liberals and identifies the “root cause” of their behavior. According to Le Bon, crowds are only as clever as the dullest person within them; if a simple message is repeated over and over again, the demagogue can create a contagion that allows unstoppable ideas and emotions to infect an entire culture. It takes a brave citizen indeed to oppose the contagion.

Coulter says liberals don’t want us to know an important part of liberalism’s history—that its policies are the same as those of the French Revolution, and that that revolution remains an inspiration for today’s liberals. She asserts that the liberal mob’s revolutionary document is France’s Declaration of the Rights of Man and of the Citizen. The French declaration addressed one’s natural rights as an individual, and one’s duties to the government. It led to the disastrous French Revolution, with its Reign of Terror; its slogan, “Be my brother or I’ll kill you”; and its symbol, the “national razor”—the guillotine.

Coulter describes in fascinating detail the horrors of that event. Six hundred thousand French citizens were killed, and another 145,000 fled the country. In the seeming blink of an eye, a great civilization was reduced to rubble, and its most valuable citizens were killed or living elsewhere. The greatest nation in continental Europe soon became a human abattoir.

The revolution would later be imitated in Germany, Russia, China, Vietnam, Cambodia, North Korea, Cuba, Venezuela, and even—with less success so far, Coulter says—by our own Democratic Party. Psychopaths from Lenin, Stalin, and Mao, to Kim Il Sung, Pol Pot, and Castro used the rabble to grab power, with the same bloody results experienced by the French. Coulter points out that during the Russian Revolution the New York Times reporter Walter Duranty won a Pulitzer Prize for calling Stalin’s forced starvation of an estimated 15 million Ukrainians a false rumor.

As she notes, the history of liberalism consists of replacing things that work with things that sounded good on paper. Liberals use the power of the state to revoke nature, the market, and popular opinion—all of which they disdain. They promise utopia; the only thing they need is sufficient willpower, and they think heaven will be found on earth. They “nationalize everything: healthcare, welfare, the speed limit, abortion, the drinking age,.…” Their view of politics is one hate machine against the other.

Coulter defines a liberal as a person who: claims to be pro-children, but supports the public schools; champions women’s and gay rights, but ignores the brutal treatment of women and gays by Muslims; yelps for clean, alternative energy, but violently opposes nuclear power; believes that Tea Partiers are terrorists, but jihadists are victims.

For example, only the liberals (Democrats), she says, could oppose Clarence Thomas, actually block Supreme Court nominee Douglas Ginsburg (for marijuana use), and then run Bill Clinton for president. Only liberals could love George Soros (convicted of felony insider trading in France), Bill Gates, and Warren Buffett, while claiming to detest Wall Street and “the rich.” And only the liberal mob has professors, New York Times columnists, former presidents, and members of Congress willing to promote their delusions.

Coulter says liberals prefer images to logic. They thrive on jargon as a substitute for thought. They can’t have normal conversations with their friends because they don’t have normal friends. By using slogans such as “working families,” “economic justice,” and “unbridled corporate greed,” they never have to talk about the actual issues being considered. Though they are all for revolution and “change,” they are scared by the mention of nuclear power plants, genetically modified foods, food irradiation, and guns with plastic frames.

Being completely uninformed is precisely how most liberals stay liberal, Coulter tells us. They simply cannot learn. They’re like children who put their hands over their ears because they don’t want to listen to Mother. Most normal people just give up and let liberals enjoy their fantasies.

Coulter writes equally well about other topics, such as conspiracy theories and the history of the civil rights movement. What she does not address is the other side of our political situation—the largely unrecognized, dark history of the conservatives and Republicans. Their history may be less “demonic” than that of the Democrats, but the Republican record just under President George W. Bush, for example, might argue otherwise.

Bush’s massive expansion of the welfare state, the disastrous No Child Left Behind Act, the USA PATRIOT Act with its domestic surveillance, his global war on terror, his creation of the hated Transportation Security Administration, his justification of the use of torture for interrogation, and the Medicare Prescription Drug, Improvement, and Modernization Act would give Coulter plenty of material to critique. This Coulter history might be titled, “Demonic: Conservatives and Americans’ Lost Rights and Liberties.” It likely would be another in her long string of best sellers.

Demonic gives conservatives and other normal Americans needed insight into one of America’s most serious problems. It should be read by all Americans.