Skip to the content
Breaking
ALERT: Support FTC Ban on Non-Compete Clauses That Trap Physicians and Patients AAPS News January 2023 – FTX and the ‘Great Reset’ Damar Hamlin Matters to You Did the Grinch Steal Christmas in Your Town? AAPS Files Brief in Case Reviewing Hospital Refusing Patient Use of Ivermectin 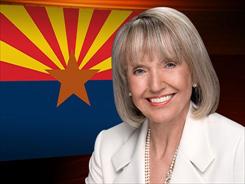 On Apr 28, Gov. Jan Brewer of Arizona shot down the basic cornerstone of state-based efforts to replace “ObamaCare” with free-market approaches to lowering costs and improving quality. She vetoed a bill (S.B. 1593) allowing small businesses and individuals to buy medical insurance across state lines, just as most larger companies already do under the federal Employee Retirement Security Act, ERISA.

About 60% to 70% of employers have more than 100 employees and thus fall under ERISA. Freed of state mandates, they can buy their insurance in any state that gives the best price and the best packages of benefits. The rest of us–individuals and small businesses—are chained to the insurance companies and mandates in our respective states of residence, and tied to whatever deals that these companies cut with the state government.

The governor was under intense pressure to veto the bill from special-interest groups, including insurance cartels and the Arizona Medical Association. The bill was amended on behalf of insurers to allow them to drop coverage for mandated services if companies from other states that don’t have the mandates come into Arizona to compete. This amendment was opposed by advocacy groups ranging from parents of autistic children to patients with diabetes, and by providers who lobbied to require insurers to cover their services.

Just 12 of the most common mandates increase premiums by as much as 30 percent. It is estimated that one in four uninsured Americans has been priced out of the market by mandates.

Brewer’s veto shows that she favors insurance companies over the 1.3 million uninsured Arizonans, stated Phoenix orthopaedic surgeon Eric Novack, M.D., founder of the U.S. HealthFreedom Coalition. He noted that Brewer’s health-policy adviser most recently worked for Blue Cross/Blue Shield and her chief of staff was chief operating officer for Arizona Physicians IPA for United Healthcare. He suggested they have influenced the governor to favor insurance companies.

Brewer also vetoed the interstate health care compact bill, which would free states from federal controls over their Medicaid program, with funding through federal block grants. Georgia is the first state to enact the compact into law.

These actions are “a blow to free-market choice and consumer freedom,” states Elizabeth Lee Vliet, M.D., a director of the Association of American Physicians and Surgeons (AAPS). “Allowing purchase of insurance across state lines simply allows small businesses and individuals to have the same choices as large businesses.”

The governor who came to national attention for standing firm on border security has failed Arizona citizens on the issue of securing medical freedom and control of our costs. “The voices of millions of consumers, small business owners, and grassroots activists were overridden by the powerful insurance lobbies.” Vliet states.

Dr. Vliet also said, “Collusion between government at all levels and big business interests is the enemy to overcome in restoring control of medicine and the medical dollar to ordinary Americans. Healthcare reform is about money and control. The complicity of both Republicans and Democrats in the public-private cartel-like deals that create more government control and less individual freedom will continue to energize the Tea Party. We must restore the focus on patient-physician relationship and individual liberty in healthcare decisions and options.”