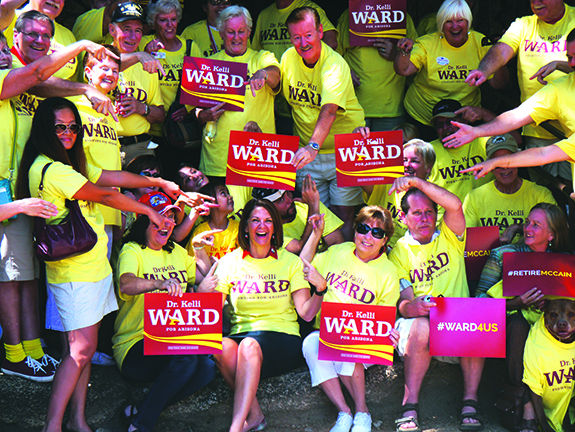 The Association of American Physicians & Surgeons (AAPS), a voice for private medicine since in 1943, gives its strongest endorsement to Dr. Kelli Ward to replace Senator John McCain in the U.S. Senate.

Arizona and our country need Dr. Ward, and her proven record of always advocating for patients and their physicians, to shake up the U.S. Senate.

Career politicians, controlled and funded by special interests, are the problem. Dr. Ward’s opponent, Sen. McCain, has raked in tens of thousands of dollars to his campaign coffers from Blue Cross & Blue Shield. Is it any surprise that he has been ineffective in stopping the avalanche of government red tape that benefits big insurance but is detrimental to patient-centered medicine?

Time and again in the Arizona Senate Dr. Kelli Ward has fearlessly stood up against the powerful forces looking to profit at the expense of Arizona patients and doctors. For example Dr. Ward held firm against Medicaid Expansion when other Republicans sold out to the medical-industrial complex, she strongly supported legislation to protect patients from Planned Parenthood’s abusive practices, and she introduced legislation to stop MOC and the FSMB’s Interstate Medical Licensure Compact.

AAPS is proud to support Dr. Ward and looks forward to her courageous leadership in DC. Visit https://kelliward.com to learn more about how you can get involved in her campaign.